Debrett's Guide to Eating a Banana 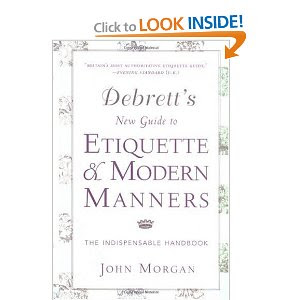 Some years ago when D & D lived in London, they were invited to a couple of posh wedding's which necessitated their purchase of Debrett's Guide to Etiquette and Modern Manners, so they could be sure they weren't the Aussies disgracing themselves (that said, Dick did get a bit sick of being on his best behaviour at one do and deliberately wore his jacket inside out much to the tut tutting of other guests at the table. I KNOW, it IS shocking!!). Anyway, during the recent wedding plans, Dora once again reached for Debrett's, and did a bit of general reading as well. Did you know there is a polite way to eat a banana, and we quote -

"Another tricky one, bananas must never be eaten monkey-style at the table. Firstly, peel with a knife, pulling off the skin in vertical strips. Cut off around one third of an inch at each end, and then cut small disks of fruit and eat either with the fingers or with a fork if provided".

What? No monkey-style? What are we going to tell the 3 year old?
Posted by Dick and Dora at 1:35 pm

Its the monkey way or the highway in this house!

when i eat a banana it looks like im sucking a dick. i just want to know how to avoid it because my mum asked me where i got so good.. i want to avoid another awkward encounter like this